It was a lovely sunny day in Perth and with an hour or so to kill I naturally gravitated to the Local Studies section in the AK Bell Library. As you do.

On the very first shelf I approached, front cover facing out and, as I later learned, freshly displayed, was Scottish Gaelic Place Names: The Collected Works of Charles M Robertson (Ed. Dr. Jacob King, Skye 2019). As I picked it up I could feel a gentle fluttering at my ear . . . Soss, Lady Serendipity at her playful best. For there, on page 324, was the derivation that had alluded me for so long: “Dalpowie = Dail Phollaidh.”

Rev Charles M Robertson (1861 – 1927) was born in Kenmore Street, Aberfeldy. He became one of the greatest Scottish Gaelic scholars of the late 19th and early 20th centuries, thanks in part to another resident of the street, Alexander Gow. (Of whom more later.) Once ordained as a minister, Robertson's 'territory' covered a large part of the Gàidhealtachd, the Gaelic speaking Highlands. Moving from parish to parish from Arran to Sutherland and across the islands of Skye, Islay and Jura, for over thirty years he gathered detailed information on place names, dialect and folklore from local Gaelic speakers.

In this instance, Robertson quoted his old friend and early mentor, Alexander Gow (1848 - 1912), as his source. An 'accomplished and modest anonymous author', according to Robertson, Gow was a teacher and ran 'Gow's Secondary School' in Kenmore Street. The two friends regularly corresponded on their researches into Gaelic place-names. True to his innate shyness and craving for anonymity, Gow published his studies as Cameron's New Historical and Descriptive Guide Book to Aberfeldy and the Neighbourhood (1899). The AK Bell has a copy of that too.

Armed with these derivations I approached Jennifer McKay, a member of West Stormont Historical Society. Jennifer has made a close study of the Scottish Gaelic place-names of Perthshire and gave a well-received talk on the subject earlier this year. What did she make of Dail Phollaidh?

Straight away she wanted to know the earliest mention I'd found of Dalpowie. “It’s possible that it is a ‘made-up name’. . . invented by the people who had the house built. This was common in the 19th century and still is. In these circumstances, the people sometimes have no idea what the confected pieces of Gaelic mean. It just sounds nice.” I easily assured her that, in the mid 18th century, estate rent rolls show four small farms across the lands of Dalpowie. Although Jennifer's suspicions about Victorian tinkering are not without some foundation. Dalpowie House has been known at various times as The Hospital, Glen Birnam, Dalpowie Lodge, and Birnam Hall.

Jennifer added, “ ‘Dal’ is likely to be a Pictish loanword which the Irish Gaelic-speaking incomers borrowed from the native Pictish speakers. The rationale is that we know the word did not exist in Irish Gaelic, ergo, it was adopted. But as all this is lost in the mists of time, nobody knows for certain sure.” 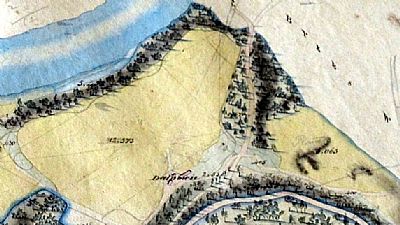 As genuinely old Gaelic names are descriptive, 'dail' was usually parsed as a haugh of land; and 'phollaidh' a pool, pond or mire. “The name may describe a damp, muddy area . . . at least in pre-improvement times.“

The illustration to the left is from a set of estate plans drawn for Sir George Stewart by his factor, James Chalmers, in 1825. The Dalpowie shown there is about a half a mile east of The Hospital (later Dalpowie Lodge/Birnam Hall) and possibly the steading leased to John Bruntfield.

For good measure, Jennifer translated Inchewan/Innis Eoghainn as "Ewan's water meadow", an area by the river that was prone to flooding. The Ewan in question possibly being St Ewan, who is said to have had a chapel near Caputh. The rental area west of Dalpowie was Easter Inchewan (partly outlined in green in the map below). Both lay on low-lying ground by the Tay, part of the same alluvial plain.  Although we do not have the definitive boundary between them, we do know that it was the tenants of Dalpowie, Anderson and Bruntfield, who contested Sir John Stewart's right to enclose Rochanroy Wood (outlined in blue) in the 1780s. This suggests that Dalpowie was the much bigger area. However, there is also a suggestion that Dalpowie may simply have supplanted Easter Inchewan as a place-name. Note the large pond towards the middle of the map. By 1899, when the area was surveyed for the 2nd ed. OS map this was Rohallion Curling Club's rink. It is also our best candidate for the source of the ice cut annually and stored in the icehouse below Dalpowie Lodge for use at the castle. Certainly a feature large enough for a phollaidh. 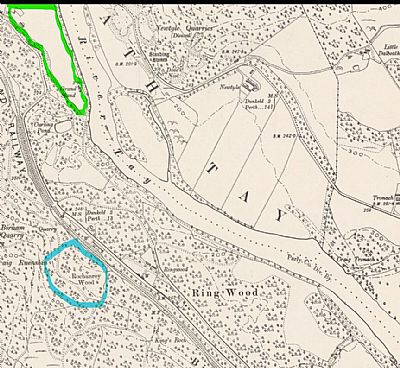 Comment from Jacob King at 09:27 on 03 September 2020.
Hi, Jake King, editor of the book you mention. I'm delighted it was useful for you. Feel free to get in touch if you have any other queries.